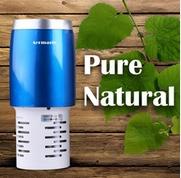 Hydroxyl bonds with hydrogen and is converted into water releasing to the air.

3.No filter replacement. For normally use of car air purifier for 1 hour per day, filter needs to be replaced once every two month at least, otherwise filter fails to work causing second pollutions. Average sales price of car air filter kit is usd35. Non-filter design, airmagic saves you USD200 annually.

4. The most humanized designlets the driver feel fresh air instantly

Up and down airflow direction adjustment ranging from 0 degree to 45degree, letting you achieve the best comfort

Thank you! Your message has been sent to the following suppliers.